Even before the COVID-19 crisis, policy makers in the OECD and beyond were identifying the potential for innovation and productivity growth that could be derived from building out digital financial infrastructure including greater sharing of financial data. This focus has helped give rise to the Open Banking Implementation Entity in the United Kingdom, the European Union’s second payment services directive, and broad discussion in the United States around a consumer-authorized data-sharing market, among other initiatives.

To what extent could open-data ecosystems for finance go beyond greater convenience and easier interactions between financial providers and their customers? Our research suggests that the upside in terms of generating GDP growth is considerable. At the same time, we find that the size of that GDP lift, and how the economic value can be shared among the various market participants, depend in large part on the design and working of each ecosystem, and in particular the degree to which data are standardized and how broadly they are shared.

In our recently published study, we focused on four regions—the European Union, India, the United Kingdom, and the United States—and identified seven mechanisms for value creation from the adoption of open-data for finance. For consumers, these ecosystems can increase access to financial services, including for individuals and small businesses who might otherwise be shut out for lack of credit history. They can also improve user convenience, including with potentially substantial time savings from less routine form-filling, among others, and provide a much larger range of financial product options. For financial providers, the value-creating mechanisms we identified include increased operational efficiency arising from more efficient data management, along with stronger fraud prevention, improved workforce allocation, and reduced friction from data intermediation, given the reduced need to pull in data from third-party providers.

We sized 24 use cases across these seven mechanisms. Extrapolating to a country or regional level, our analysis suggests that the boost to the economy from broad adoption of open-data ecosystems could range from about 1 to 1.5 percent of GDP in 2030 in the European Union, the United Kingdom, and the United States, to as much as 4 to 5 percent in India. All market participants benefit, be they institutions or consumers—either individuals or micro-, small-, and medium-sized enterprises (MSMEs)—albeit to varying degrees.

For now, however, only a fraction of that potential value is being accessed, including in countries such as the UK which in some ways has pioneered open data in finance. We estimate the UK has accessed about 30 to 40 percent of the potential value, whereas the European Union and the United States are at about 10 percent of the potential. India, which has been building out its digital financial infrastructure on the back of its Aadhaar digital identification system, has managed to access about 60 percent of the value of open data for finance to date, we estimate, in part because small companies have sharply reduced the time they need to spend on filling in financial forms.

Capturing more of the potential value will require a greater degree of data standardization and broader data sharing. For now, both are quite varied across the four regions we examined. 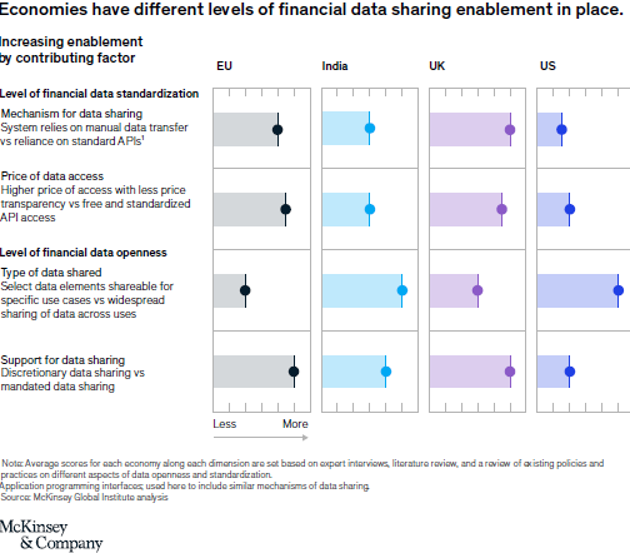 For all countries interested in pursuing open data for finance ecoystems, key takeways from our research include the critical importance of establishing trust in the system, along with the infrastructure to support it. Financial data are particularly sensitive, and users are more likely to want to share data if they know what they are sharing and why that sharing is valuable to them.

Digital infrastructure is also a must, and ecosystems with high-assurance digital ID have an advantage in being able to control use of data and reduce friction in managing online accounts.

A final essential ingredient to create value from open data for finance is the role of innovation. Open data ecosystems are like sunlight rather than oil, and multiple actors can benefit, from traditional banking incumbents to technology platform-based players and new fintech startups. Expanding the boundaries of open-data enablement would make new types of use cases possible, fueling greater innovation and greater value capture.