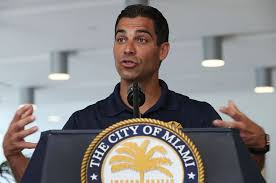 Competition heats up between Miami and New York City as mayors of the two have vision of making their cities hubs for virtual currency.

Miami’s mayor, Francis Suarez wants to be the first to create a new way of raising money for the city – through a new cryptocurrency, which he hopes one day to be able to hand out MiamiCoin to every resident, as a kind of digital dividend –  a part of his drive to establish Miami as a centre for cryptocurrency.

MiamiCoin, an experiment the mayor launched this year, could bring in so much revenue that there could be a future scenario where “Miamians would no longer need to pay municipal taxes,” the Republican told BBC.

“I believe we’ve been presented a very unique opportunity to diversify our economy,” he said. “Prior to the pandemic over 60% of Miami’s economy was service sector-based. That left us particularly vulnerable to Covid and I won’t pass on the chance to change that.”

But while Mr Suarez is first out of the blocks, he’s not the only mayor in the race for crypto-capital of the US. Hot on his heels is the man about to take over next month as New York mayor, Eric Adams.

Mr Adams, a Democrat, who takes office in January, has promised to make New York a crypto-hub. He has talked about city employees getting paid in cryptocurrency and wants lessons on cryptocurrency in New York schools.

Once he’d heard that Mr Suarez had asked to get his first paycheque in Bitcoin, the New Yorker requested the same for his own first three months’ pay. Mr Adams is backing his city’s version of a cryptocurrency, NYCCoin.

While some of the rivalry may simply be about sending out signals, both mayors are serious about establishing their city as a hub for cryptocurrency business.