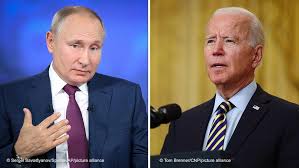 Experts say that billionaire oligarchs close to Russian President Vladimir Putin could potentially blunt the effects of Biden administration’s pledge to impose harsh economic sanctions on the country over its invasion of Ukraine, through cryptocurrency. Other governments that have been the targets of sanctions, including Iran and North Korea, have relied on digital currency to mitigate their effects.

“The lessening of US sanctions power comes from a system where these nation-states are able to do transactions without going through the global banking system,” Yaya Fanusie of the Center for a New American Security told the New York Times.

Cryptocurrencies, which are digital assets that use cryptography to mask their users, are reliant on blockchain technology, whereby data is available on a public ledger but is stored in a way that lets users adopt pseudonyms. These pseudonyms are attached to digital “wallets” that are used to transact cryptocurrency.

“If two people or organizations want to do business with each other and are not able to do so through the banks, they can do it with bitcoin,” said Mati Greenspan, CEO of financial advisory firm Quantum Economics.

“If a wealthy individual is concerned that their accounts may be frozen due to sanctions, they can simply hold their wealth in bitcoin in order to be protected from such actions.”

So far, Russian authorities have been lukewarm to cryptocurrency for fear that giving citizens another avenue of financial transactions would dilute the government’s grip on domestic monetary policy.

There is also disagreement within Russia as to the best way to regulate cryptocurrency, which the central bank in Moscow views as a pyramid scheme.

However,in October 2020, the Russian central bank announced that it would create a new “digital ruble” that would make its economy less dependent on the US dollar as its main trading partner, China has already created its own digital currency.