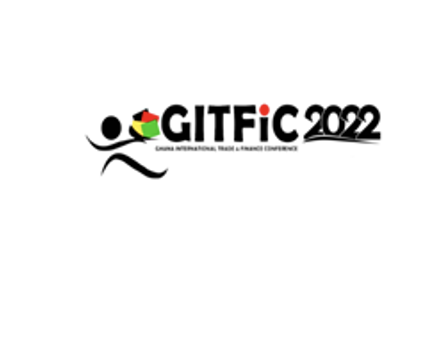 COMMUNIQUE ISSUED AT THE END OF THE 6TH GHANA INTERNATIONAL TRADE AND FINANCE CONFERENCE ON THE THEME: TOWARDS AN EFFECTIVE AND EFFICIENT MOBILE MONEY TRANSACTIONAL PENETRATIONS IN AFRICA; A CATALYST TO SOLVING CROSS BORDER PAYMENT & SETTLEMENT, AN ANTICIPATED BARRIER WITHIN THE AFCFTA; THE ROLE OF FINANCIAL REGULATORS AND STAKEHOLDERS, HELD AT THE ALISA HOTEL, ACCRA ON 23RD AND 24TH MAY, 2022

Measuring the Acceptability and Adaptation Level of the AfCFTA on the African Continent a Year after Implementation of the 1st Phase;- Where do we stand in terms of Trade in Goods, Trade in Service, and Dispute Resolution Protocols (Policy Direction)

Leveraging on the pillars of Trade-Finance – A catalyst for Industrial Growth and Acceleration Post Pandemic; the Role of Payment, Financing, Risk Mitigation and Access to Information

The establishment of the African Continental Free Trade Area (AfCFTA) has been described as a stepping stone to economic prosperity for about 1.3 billion people on the continent. While the AfCFTA will enhance economic integration and expand the frontiers of trade, there is a need to nurture the underpinning pillars through proper coordination of processes within the trade ecosystem.

The Ghana International Trade and Finance Conference (GITFiC) organised its 6th Trade and Finance conference at the Alisa Hotel, Accra – Commercial Capital of Africa, in furtherance of its promotion and commitment to ensuring pragmatic, effective, and holistic solutions are given to issues of Trade, Finance, Trade-Finance, and Logistics. The conference held on the 23rd of May and 24th of May, 2022, had several dignitaries and key stakeholder attendees drawn from industries, academia, trade, business, logistics, trade finance, and finance sectors. Members of the diplomatic community in Ghana and abroad, including the Ambassadors of the European Union, Peru, Mexico, Russia, Equatorial Guinea, Hungary, Congo, Algeria, Turkey, Namibia, Kenya, Saharawi, Suriname, Togo, Italy, Australia, Burkina Faso, Angola, Mali, Cote d’Ivoire, Iran, Saudi Arabia et al graced the 6th conference. Delegations were also received from the Ministry of Commerce and Industry and the representatives of the business community of countries such as Cote d’Ivoire, Namibia, Kenya, Angola, Burkina Faso, etc. Also in attendance were special delegations from the National Treasury of Kenya, Nairobi International Financial Center Authority, West African Monetary Institute (WAMI), and the President of the Association of Kenyan Micro-Finance.

The conference was chaired by Mr Tsonam Cleanse Akpeloo, the Chairman of the Association of Ghana Industries – Greater Accra. In his remarks, he stressed that the creation of the African Continental Free Trade Area (AfCFTA) should not be a theoretical framework, but should be seen as a practical action to achieve the overarching objective of Africa becoming an economic powerhouse. He requested African countries to empower the Micro, Small, and Medium Enterprises (MSMEs) to harness the full benefits of the AfCFTA.

The Chief Executive Officer (CEO) of the Ghana International Trade & Finance Conference – GITFIC, Mr Selasi Koffi Ackom, highlighted the importance of the conference and stated that his institution would continue to create the necessary platform for policymakers, captains of industry, trade, logistics, Trade-Finance, and finance experts, to deliberate and proffer implementable solutions to the myriad of challenges facing the operationalisation of the AfCFTA and all other global trade agreements. Further in his welcome address, he assured the African and Global Communities of his outfit’s willingness to bridge the huge sensitisation, education, and informational gap which continues to hinder the public awareness of the AfCFTA. GITFiC, a month before the 6th conference completed a three-month survey in Ghana on the awareness and acceptability level of the AfCFTA and will be briefing the Ghanaian media on the scientific result and define the modalities used before the close of June 2022.

Mr Ackom also announced the launch date for the much-anticipated book on the AfCFTA titled; Actualising the African Economic Vision; A Practical Handbook on the AfCFTA. The book has been extensively reviewed by a group of competent experts from the department of the Economic Commissioner of Development, Trade, Industry, and Tourism of the African Union and has received a full endorsement from the Commissioner H.E Albert M. Muchanga with strong advocacy for the book to be adopted by Africa’s Educational system and a must-find book on the table of every business person on the Continent and persons intending to do business in Africa. He stated that other key stakeholders are equally reviewing the book.

A keynote address, given by H.E. Albert M. Muchanga, AU Commissioner for Trade, Industry, and Tourism highlighted the trade vulnerability of African economies in the face of global supply disruptions and instability. He stressed that the AfCFTA would reinforce the structural economic pillars of African economies and boost intra-African trade and economic welfare.

H.E. Irchad Razaaly, EU Ambassador to Ghana, made a presentation in which he dispelled concerns that the Economic Partnership Agreements (EPAs) signed with African countries were intended to undermine the AfCFTA. He reiterated the EU’s commitment to the industrialisation of the African economy and stressed that the EPAs would catalyse the economic development of partner countries.

The Minister for Commerce and Industry Promotion in Cote D’Ivoire delegated the President of the Ivorian Chamber of Commerce to deliver an address and made a profound presentation that highlighted some of the key strategies developed to promote MSMEs’ participation within the single market of AfCFTA. He led a 13-member delegation to the 6th Conference which included heads of the private sector and financial institutions.

A presentation by the West African Monetary Institute (WAMI) highlighted the efforts made in developing the Pan African Payment & Settlement System (PAPSS) as the payment and settlement framework for the AfCFTA. It was stated that the PAPSS has received considerable acceptability since its formal launch in 2021. It was recalled that the 5th Conference, held in 2021, deepened discussions on the PAPSS, with high-level inputs shared by the Vice President of Ghana as well as financial executives from West Africa (BCEAO), Central Africa (BEAC) et al.

The Kenyan delegation in their presentation recommended that the PAPSS could leverage the lessons learned during the development of the East Africa Payment System (EAPS) and Regional Payment and Settlement System (REPSS) which currently facilitates cross-border payment and settlement within the EAC and COMESA economic communities. A call was also made for M-Pesa, the flagship mobile money network, to be used as a model and complementary alternative for an efficient and cost-effective means of mobile transactions.

Deliberations from panel sessions brought to the fore the key issues and concerns affecting access to finance within the trade ecosystem. A panel discussed the role of payment systems, financing, and how financial risks could be mitigated, particularly, among the Micro, Small, and Medium Enterprises (MSMEs).

Representatives of the Society for Worldwide Interbank Financial Telecommunication (SWIFT), and MasterCard Inc., indicated that the PAPSS could seamlessly synchronise with their digital architecture, to facilitate the net settlement process. SWIFT Inc. pointed out that its system can process varied forms of payments as it currently accommodates the Real Time Gross Settlement (RTGS) of various African countries.

There was a panel discussion on the topic “Leveraging on the pillars of Trade finance – a catalyst for industrial growth and acceleration post pandemic; the role of payment, financing, risk mitigation and access to information.” This session highlighted the challenges faced by MSMEs in accessing finance and credit. Panelists recommended that African nations should embrace and invest in data issues so that financial institutions can have a national database to identify, verify, and authenticate the profile and credit worthiness of traders/applicants.

Another panel which comprised trade experts from Ghana, Cote D’Ivoire, and Namibia brought into perspective the status of the AfCFTA since its implementation in January 2021. Discussions focused on the progressive elimination of tariffs under AfCFTA and its implications for the revenue structure of some African countries.

An overview was given on the AfCFTA protocols on Trade in Goods, Trade in Services, and Dispute Settlement Mechanisms. It was stated that other protocols were at a varied level of negotiations. The business community in Africa was encouraged to remain optimistic about the future of the AfCFTA, notwithstanding the implementation challenges. Regional economic groups at the conference expressed their commitment to trade among one another and requested the AfCFTA signatories to fast-track the submission of tariff schedules.

The conference served as a fertile ground for intellectual discussions as conference speakers and panelists made various remarkable contributions toward the optimisation of the AfCFTA implementation. The following were highlighted:

Participants agreed that the identified challenges need to be addressed and given a sustained strategic priority. Consequently, we make the following recommendations for consideration by policymakers and implementation agencies:

The GITFiC expresses its deepest appreciation to the African Union, and particularly to its Commissioner for Trade, Industry and Tourism, H.E. Albert M. Muchanga; Ambassadors of the European Union, Diplomatic Corps from home and abroad, the business community of Africa, and all who participated and contributed in diverse ways to make the 6th conference on Trade & Finance a success. A special appreciation to Ghana’s Minister of Foreign Affairs and Regional Integration and most especially Mr. Bonaventure Adjavor; Director of Economic Trade and Investment Bureau. We equally extend gratitude to our distinguished experts and panelists from the Cote D’Ivoire, Namibia, African Development Bank, Ghana Chamber of Telecommunications, Ghana International Trade Commission, Versus Bank – CI, MasterCard Inc, SWIFT – West Africa Monetary Institute, ECOWAS Bank for Investment and Development, Kenya, Angola, Burkina Faso et al.

Our main Partners for the 6th conference, Ghana Oil Company Limited and Rescue Shipping & Investment Company Limited, We say a big thank you for holding us down.

The Ghana International Trade & Finance Conference – GITFiC recognises, with gratitude, the expression of commitment and support evidenced by the participation of the high-level delegations from the Ministries of Trade and Commerce and Industry Associations of Cote D Ivoire, Namibia, and Kenya.

In furtherance of GITFIC’s commitment to ensuring that the prospects and benefits of the AfCFTA are shared with the varied facets of the business community, a practical book on the AfCFTA would be launched before the close of the year 2022. This book gives simplified coverage of the key provisions and protocols of the trading pact.

The GITFiC looks forward to continuing to work with the African Union Commission and other relevant international entities to make progress in the swift implementation of recommendations.