On 1st of April, as I was publishing my Uniconization of African Fintech piece, Mastercard was busy announcing their $100 million investment into Airtel Money (Airtel Africa’s mobile money subsidiary) to acquire a minority position – half what TPG Capital. Even though I had gotten wind of the transaction knowing that Mastercard was already in bed with Airtel Money – some part of me thought of it as an April fools joke…:-). On the 12th of April 2021, Mobile Telecom Network (MTN) announced the valuation of their mobile money business at $5 billionmaking it the 7th African fintech unicorn with plans to bring in minority shareholders before going public. Given that Visa is already in bed with MPESA(Vodacom and Safaricom’s mobile money business), it is a matter of time before Visa also invests. The unicornization of African fintech is the first trend but the second, topic of today, are the mergers and acquisitions in the sector.

Mergers and acquisitions are slowly taking shape in the African fintech sector but, unlike the uniconization, they are manifesting on two interrelated tracks that may or may not eventually converge. The first track is maturing fintechs are acquiring smaller and earlier stage ones to grow their market share and establish territorial presence as Andrew Takyi-Appiah, CEO of Zeepay, told me. On the 28th of April 2021, two headlines made the news; AZA bought Exchange4Freewhiles Ajua acquired Wayawaya. Zeepay had earlier acquired Zambia’s Mangwee Mobile Money and MSF Africa had acquired Beyonic last year. In 2018, Emergent Technology acquired Interpay Africa in Ghana and back in 2016, Interswitch acquired Vanso – the infographic below gives you more details. 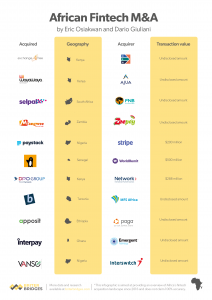 The second interrelated and accelerating track that has the African banks at the center of it. Some of the big banks in Africa have realized that if they are not careful, African fintechs would take over what used to be the domain of banking. This has led some of them to establish ways to gain visibility into the market so that they can make snap acquisitions and strategic investments to protect their interests. The first evidence of that came through on the 24th of March 2021 when First National Bank (FNB), South Africa’s most innovative bank acquired 100% of local fintech firm Selpal to gain access to their community and township based “mom and pop” businesses.

With FNB leading the charge other South African banks are following whiles the phenomenon is slowly crawling up to Eastern and West African banks. Standard Bank setup a corporate venturing arm and also backed Founders Factory to cultivate ventures for them to invest in. Nedbank has a VC team that has made eight investments so far. Amalgamated Banks of South Africa (ABSA) made their first investment in 2019 followed by the second one in 2020. Rand Merchant Bank (RMB) has their own accelerator, Alphacode that is incubating startups. Ecobank Group has their fintech challenge which annually selects startups that have strategic fit for integration. Equity Group which owns Equity Bank has also launched the Equity Investment Bank (EIB) to back early-stage funds that would back startups. A totally different approach but with the same ramifications.

Then we have those banks that seem to be late to the party or have still not come to terms with the changing landscape and continue to lobby regulators not to allow fintechs into their space. That came to a head on last month in Nigeria when the lenders kicked MTN Mobile Money (MoMo) off their shared platform because MTN MoMo halved it commission charged on the banking channels to 2.5%. The regulator had to intervene to restore MTN MoMo to the platform and reinstated the commission to 4.5% for the purchase of airtime via the banks. Whilst this may look trivial; it is really about the banks that are not on the fintech wagon realizing that fintechs are putting their business and margins at a significant risk. For example, in Ghana, MTN MoMo has about 15 million active accounts whilst all the 23 banks collectively have about 5 million bank accounts – that is a 3:1 ratio.

In Nigeria, the Central Bank is yet to approve payment-service licenses to MTN Nigeria and Airtel Africa after two years of them putting in their application which would allow them to provide most banking functions except lending and taking foreign-currency deposits. Whiles that seems to be a showstopper, Nigeria’s recent open banking regulations have forced the banks to share their data with the fintechs. This levels the playing field to some degree but begs the question whether the banks would change their strategy and start looking to acquire the fintechs or whether the fintechs like Flutterwave, Interswitch, Fawry, Airtel Money, MTN MoMo or MPESA which are all worth more than a billion dollars might turn around and start acquiring the banks. Whichever way it goes, M&A is going to characterize the African fintech space as the second major trend after unicornization for the foreseeable future.