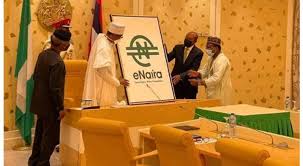 Nigeria becomes first in the Africa to fully launch its digital currency, eNaira – on Monday by  President Muhammadu Buhari.

The initial date for the official launch of the eNaira was scheduled for Oct. 1 but was postponed in respect to the 61st anniversary of Nigerian independence on Oct. 1 this year.

“We have become the first country in Africa and one of the first in the world to introduce a digital currency to our citizens,” Nigerian President, Muhammadu Buhari said at the official launch.

“Let me note that aside from the global trend to create Digital Currencies, we believe that there are Nigeria-specific benefits that cut across different sectors of and concerns of the economy.“The use of CBDCs can help move many more people and businesses from the informal into the formal sector, thereby increasing the tax base of the country,” he added.

The eNaira is to operate as a wallet against which customers can hold existing funds in their bank account. It is intended to complement the physical currency, Naira and not to replace it.

The CBN aims for the digital currency to increase financial inclusion rapidly and easily. Creating and holding funds for citizens in a central bank account could offer better access to financial services for the unbanked or underbanked, safe and convinient.

Five countries have already launched CBDCs, with another 14 including Sweden and South Korea in the pilot stage, according to the Atlantic Council’s CBDC tracking project. In West Africa, Ghana is also looking to launch its own CBDC soon